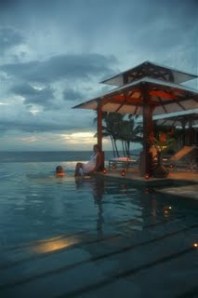 Our Editor-in-Chief calls Maui home so, when it comes to finding new deals and secret retreats, it’s a bit of a challenge. She knows almost every place already. However, in all her years of traveling to and from the island, this winter, she and her husband were surprised to uncover a beauty among the beaches. The Wailea Beach Marriott Resort & Spa, nestled right next to the Shops at Wailea, is just a few hundred feet from well-known properties like The Four Seasons and The Grand Wailea, but offers something you won’t find at more popular locations… no screaming kids! That’s why we’ve voted it the ‘Best Luxury Lover’s Getaway on Maui.’ Not to mention the fact that it’s slightly less expensive than her neighbors.

With an onsite restaurant, Mala Wailea, from world-renowned chef/owner Mark Ellman, it also has one of the best Kobe burgers in town. The resort offers 546 guest rooms and suites with amenities like high-speed Internet, a 27-inch flat screen TV, cable TV, video games, a private lanai (balcony), the Mandara Spa with holistic treatments from the Far East, five swimming pools, including the new Maluhia Serenity Pool with six exclusive over-the-water cabanas reminiscent of over-water bungalows in Bora Bora, and nearby golf, tennis and Shops at Wailea. The rooms, pictured here, were all recently revamped and look more like a sophisticated W Hotel than the usual (and somewhat dated) luxury hotels nearby.  Though it’s not as beach front as the other properties nearby, you will save a few hundred bucks a night and you’re closer to the Shops at Wailea.

The beach is also just a two-minute walk down a paved oceanfront path. Plus, no other property nearby has anything like their over-the-water cabanas and infinity pool. This is property for adults… and celebs who don’t want other guests constantly gawking. To wit, when our EIC stayed here, Lindsay Lohan was taking some much needed down time. So, though we may be young at heart, we really like our quiet sexy time.

Lately, we’ve been hanging out with a bunch of real babies.

And we don’t mean the adult kind that are too afraid to climb mountains or repel into valleys. No, we’re talking about the burping, crying, eating, and napping kind. It sure made us realize a few overwhelming things about life (which we’ll save for another story). It also made us realize that even cool moms need travel advice. So, just as school is out, families everywhere are looking for great getaways, vacation ideas, and summer camps – and we found a website that makes it easier than ever.

Mamapedia is a one-stop-shop where moms can ask a question or pose a search on an array of topics – everything from local day camps to cheap vacation ideas, or how to entertain the kids on a long car ride – – and get fast and complete answers from the real experts- other moms!

There’s no registration or fee required to search and find, with just a few clicks of the mouse, the right spot for your own crying, eating, burping, napping family. Every time a question or search is entered, a series of answers will come into play – and then moms can take the answers and insight that make sense for their family. More than a million answers are at their fingertips.

So, if you got knocked up and now need to figure out how to relax (or send your little darling away for the summer), we think you should check it out.

40 Waterfalls… 0 tourists. We write about Hawaii, Tahiti, Bali, Bora Bora, the Maldives, and the Greek islands about as much as we can. Jaunt lovers adore these exotic island locales, but they also love reading our site to learn a bit about the secret gems of Europe, otherwise known as… the island chains less travelled. This brings us to enlighten our readers to… the Azores islands of Portugal!

The archipelago of the Azores, the closest point in Europe to New England, is made up of nine islands. Sapphire blue and emerald green lakes, fertile prairies, volcanic cones and craters, colorful hydrangeas and azaleas, 15th century churches and majestic manor houses, all make the Azores unlike anywhere else on earth. As a destination, the Azores have won numerous accolades: One of 10 Best Values, USA Today; Top 10 Places for Whale Watching, Sherman’s Travel; Top 3 Places to See Foliage Outside of the US, Wall Street Journal and Top 10 Islands You Never Heard of from Budget Travel.

If you stand on the beach at Faja de Baixo and look out at the sea, there is nothing but water between you and the eastern coast of the United States. Behind you, 40 waterfalls cascade down soaring cliffs. It’s hard to find a more enchanting place than Flores, and its tiny neighbor, Corvo. Together, they make up the Western Group of Azorean islands – over 150 miles from the Central Group.

Flores’ landscape is quite different from the rest of the Azores, it feels younger, and windswept. It’s western coast is a flat slice of land, called a Fajã, running from the cliffs of the mountain plateau to sharp black rocks and beaches along the Atlantic. Tiny towns, with white washed houses flow to the sea, and a dozen of waterfalls splash from the cliffs behind them. In this mild climate, there are cedar forests, tidal pools, and trails to climb to the waterfalls.

The central mountain plains are dotted with seven crater lakes, all easily accessible by foot or car. The landscape here is like a romantic English moor with lines of hydrangeas that follow the road’s that rise fall with the green landscape. Sheep, goats and cattle graze amid the dark crater lakes, and rabbits dash back and forth among the brush.

The southern coast is home to the former whaling town of Lajes Das Flores, where the black ramp leading up to former whaling factory is still the best way to the rocky beach. Old tripots and whaling implements are on display at the factory, while nearby restaurants serve the fresh catch of the day with a 19th century church towering over the village.

Follow the ocean road north through cedar forest to the main town of Santa Cruz on the east coast to the small island of Corvo, shaped like a giant tear, floating 30 miles off the coast. It’s 300 inhabitants live in the island’s only town, Vila Novo do Corvo, a wild open place acesible by a 10-minute flight, ferry, or by tagging along on a local fishing boat. We say opt for the latter. Pleasant, white, and riding high black sea cliffs, Santa Cruz boasts most of the island’s simple eateries, many run by fishermen and their families, as well as a whaling museum (with loads of New England artifacts and all sorts of bottles of whale oil). The town offers a few basic hotels, and plenty of activity in its ports.

Follow the road north along steep sea cliffs to the northern town of Ponta Delgada, with its lighthouse and open coast. From here, trials stretch back miles to the south coast, perfect for hiking. There is no access for cars and the landscape is green and wild. No village or sign of life can be found for miles, as the centuries old footpaths lead through waterfalls, and striking sea views back to the westernmost coast in Europe.

Most hotels are comfortable, affordable and near the sea, but two places stand out for authentic experience of what life on Flores is like.

Cuada was a tiny village that saw it villagers emigrate for a better life decades ago. When Carlos and Teotonia Silva started to buy up the ruined houses, it was over grown, its ocean views no longer viable. Over two decades they bought and restored 15 of the towns’ 17 houses (one is still in the hands of a family, the other is a chapel), and made them into simple one and two bedroom cottages. The Aldeia (or Village in Portuguese) has the feel of an ancient town, with its rough stone paths (no cars allowed) open fields, and stone houses all with kitchenette, and furnished in period antiques.

Azores Express, a U.S.-based tour operator and member of the SATA Group, offers direct flights on wide body A310 aircraft to São Miguel, the main island in the Azores archipelago with connections to Flores. Connecting flights from São Miguel are also offered to Lisbon and the island of Madeira. Azores Express has connected New England with the Azores and mainland Portugal for more than 25 years. The carrier is part of the SATA Group, which connects the Azores, an autonomous region of Portugal, with the world.

Let me guess… you’d love to keep a journal, but you just don’t know where to begin? We might be a band of crazy gypsy writers, but we also know a thing or two about writer’s block. That’s where Taschen’s first text book, Simple Diary™, comes in handy. The Diary offers a creative way to journal, with a slightly outrageous spin. Art Book publisher Benedikt Taschen’s latest release by renowned artist and author, Philipp Keel, is a curious collection of fill-in-the-blanks, multiple-choice, word associations and lists that give readers the “simple tools” to create unique, memorable daily records without all the heavy lifting of blank journals. This unique diary is Taschen’s first release primarily filled with text which Taschen describes as, “a book that provides us with a little comfort in difficult times.” Illuminating thought starters, queries and illustrations enable the reader/creator to explore, navigate and document the chaotic adventure that is life. Unlike traditional journaling, Simple Diary™ is designed to take the pressure out of journaling by providing boundaries to help the reader get to the essence of his/her day, week or moment. Simply stated, in a time of information overload, Simple Diary™ is the antidote to the modern age.

Available in stores on June 20, you can get in your pre-order by visiting:

Marketing Executive, Journalist, and Hotel Hound, Layla Revis has worked as an Adventure Guide in the jungles of Costa Rica, rafted Switzerland’s Class IV rapids, studied wildlife in Australia and New Zealand, worked as a Hollywood advertising film executive, and helped brands like Samsung and Oracle tap into the best of their digital marketing lives. In addition to living on the 13th floor of an apartment complex in Buenos Aires and steps from the Viper Room off the Sunset Strip, she's been a columnist covering the spa industry for DaySpa Magazine and a Contributing Editor/Columnist at Los Angeles Confidential Magazine covering entertainment, luxury travel, and charitable causes. She's also contributed to The Huffington Post, Mashable, Teen Vogue, Town + Country, Islands Magazine, Kiteboarding Magazine, Moving Pictures Magazine, and Surface Magazine. PS. She doesn't like water chestnuts.