It is a truth universally acknowledged that on a pretty summer’s day there is nowhere better to be than in an English country garden. Waves of bluebells dance in a honeysuckle breeze as butterflies glide from glittering stream to ancient oak tree. And, of course, there’s always a chance you’ll spot Peter Rabbit in the vegetable patch, or Winnie the Pooh taking a nap on a bed of nettles.

Many travelers are so drawn to the bright lights and big sights of London that the English countryside is lost for them. As a born and bred Londoner who finds herself able to breathe deeply during a flora and fauna-tactic escape past the suburbs and into the green patchworks of her homeland, I can’t impress on anyone what a mistake this is. It is beautiful, historic, literary and charming – all those things foreigners love about Downton Abbey wrapped up in a village cream tea and a meander down a cobbled street.

The Four Seasons have done a very clever thing, opening a resort a one hour drive away from their two city hotels, making it the perfect add-on for the culture vulture, theatre lover or weary business traveller. Leaving London behind, on a road that takes you past the old (the 1,000 year old Windsor Castle, the Queen’s favorite palace) and the new (fancy a ride on a space shuttle at Legoland, anyone?), you arrive at The Four Seasons Hampshire.

Your jaw will drop.

Dating back to 1728, the heritage-listed manor house around which the Hotel is built is much documented in historical texts throughout the centuries. With spectacular views over the Hampshire countryside, the Hotel’s resort-like facilities place the countryside’s finest pursuits on its doorstep. On-site facilities include a 14-horse stable, fishing lakes, clay pigeon shooting, narrowboating, nature rambles and tennis.  Add to this, the manor’s ancient association with high society – and in Henry VIII’s case, a royal scandal – and guests can experience a taste of Hampshire’s historical and cultural wealth before they even leave the Hotel grounds. You’ll feel very Lord and Lady Grantham, without the  need for a corset.

If you can tear yourself away from the spa and outdoor vitality pool, the picturesque surroundings will keep you very busy. In fact there’s so much to see you’ll wish you’d doubled the length of your stay. Just 30 minutes away lies Winchester, a traditional cathedral city with impressive boutiques and numerous museums and art galleries. Boasting a 1300 year unbroken succession of bishops, Winchester is home to the legendary ‘Arthurian’ Round Table, situated in the Great Hall of the old castle. The ancient capital of England has been inspiring visitors for centuries, including Keats, who wrote his Ode to Autumn, while staying here.

Hampshire is also littered with a wide range of beautiful historic houses that are open to the public.  Stratfield Saye is the estate purchased by a jubilant Duke of Wellington at the bequest of an adoring nation upon his return from the Battle of Waterloo in 1815. The house is still the home of the present Duke and Duchess of Wellington and exhibitions in the Hall and original stable block document the 1st Duke of Wellington’s life and triumphs.

Charles Dickens’ birthplace can be visited in Portsmouth, and having inspired writers for centuries, it is no surprise to discover that Jane Austen penned her literary classics Pride & Prejudice, Emma, Mansfield Park and Sense & Sensibility in the tiny Hampshire village of Chawton, a pretty fifteen minute drive from the hotel.  Now a museum documenting her life and works, many of the rooms in her 17th Century house have been preserved in their original state. You can see the desk and chair where she wrote, taking in the view from the window that inspired her. I mean, come on… How awesome.

And as 2013 is the 200th anniversary of the first publication of Pride and Prejudice, there is no better time to grab your beloved and get your Elizabeth and Darcy on over a romantic feast of English fare (try the divine if pant-bursting Hampshire Farmers’ Market Lunch every Sunday at the Four Seasons – a refined, edible exploration of Hampshire’s famous Farmers’ Markets) before burying yourself into a classic novel by the fire in the hotel ‘s library, and perhaps a sneaky doze, dreaming of Lords, Ladies and clotted cream.

Sarah Ivens, Editor-at-Large for Jaunt Magazine, is the founding editor in chief of OK! magazine in the US and a bestselling author in her native UK. Her writing has been seen in Marie Claire, Glamour, In Style and GQ. A born and bred Londoner, she currently resides in Los Angeles.

Our friends at The Daily Meal love to keep us informed on the best of the best when it comes to food around the world. This time, they’ve done a great 20 best hostels around the world for food (since we know hostels can get a bad rap, and most of the time, that reputation isn’t unfounded). If a hostel serves any food at all, the best most backpackers can expect to find is some cheap white bread and bad coffee. For many travelers, this lack of decent food is hardly a point of contention. After all, eating pricey gourmet meals often isn’t an option for those traveling on a budget, and as long as the hostel is well located, safe, and free of bedbug sightings, what more could a backpacker ask for? A lot more, apparently, according to recent research.

A hostel meal will likely never reach the ranks of Michelin-starred dining or compare to the breakfast buffet at the St. Regis. However, some establishments are offering culinary delights such as barbecue, ceviche, poutine, and a burger that even the locals clamor over, and these are just a sampling of some of the excellent dishes found in hostel dining rooms around the world.

For a minimal fee, guests at PLUS Berlin Hostel can enjoy an all-you-can-eat breakfast buffet and dinner in the hostel restaurant.  The restaurant’s manager, Diego, is Italian and takes pride in the quality of the food. Options range from pizza and pasta dishes to German specialties. The hostel’s well-stocked bar also serves cocktails to get you ready for a night exploring the neighborhood’s nightclubs.

So what makes a hostel’s food stand above the fray? “Food is part of the cultural experience you get when you visit a foreign country,” explains Andres Poveda Solano, co-owner of Hostel Pangea in Costa Rica, while Green Tortoise Hostel in San Francisco provides hearty and healthy free breakfast every day of organic oatmeal and fresh fruit, and free dinner three times per week including dishes like pasta primavera and Thai curry.

Good food at a hostel enhances the backpacker’s experience. One of the charms of staying in a hostel is the opportunity it offers to meet people from all over the world, and for these hostels, the dining room is one place where the magic happens. Whether you’re enjoying a hearty breakfast on a terrace overlooking the scenic French countryside or participating in a free tour with fellow travelers of a Spanish city’s tapas bars, the food at these top 20 hostels will create memories you won’t quickly forget.

The 20 Best Hotels Around the World For Food

What hostels have you stayed in that had great food?

Spring and Summer in the Napa Valley:  the air is fresh and fragrant with blooming wildflowers, vineyards are awash with green buds signaling another growing season, and afternoons are filled with bright abundant sunshine. We can’t wait to hit up our favorite part of California in the coming weeks! From hikes and golf clinics to a new bar at The Restaurant at Meadowood, this season’s happenings are a refreshing spring awakening.

For more information about travel to the Napa Valley, including special offers and a full calendar of spring and early summer season events, visit www.visitnapavalley.com 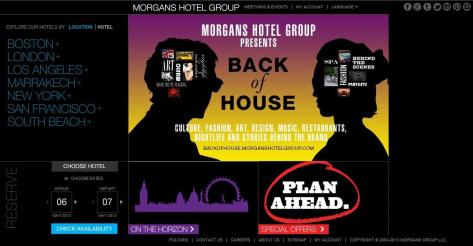 Not unlike other major players in the digital hopsitality game like SLS South Beach’s new App or Conrad Hotels’ Conrad Concierge, now the Morgans Hotel Group, perhaps the first ‘Chic King’ in the hotel industry’s boutique sector with properties like the Delano (South Beach, Marrakech), Mondrian (LA, South Beach, NYC), Hudson (NYC), and Sanderson (London) to name just a few, has tapped New York-based digital agency, Firstborn, to partner on digital programming across its hotel properties, in addition to the development and re-launch of its global website. Firstborn will focus on creating mobile and web-based content geared toward enhancing the guest experience and promoting the brand’s boutique culture.  They’ll also be working to develop exclusive on-property technologies that will deliver a more personalized stay.  I’ll be curious to see what that entails, but I certainly have some ideas, if you need me, guys.

Since mobile is clearly the new social for consumers, Kim Walker, Creative Director and Senior Vice President of Brand and Marketing at Morgans Hotel Group, said their goal to create “an enhanced presence that will provide better service, anticipate guest needs, and engage guests during every step of their stay.”  The real point here is that, when a guest chooses to stay at a Morgans Hotel Group property, they’re not just getting a place to sleep, they’re choosing to experience a unique culture.  This is a common trend in the hotel game and one that will only continue to become more competitive and innovative as hotels battle for the heads and beds. Earlier this year, Morgans Hotel Group also attempted to bring life and style back to the lifestyle game by introducing Back of House, a culturally rich blog that features curated content in the world of design, art, fashion, music, food and nightlife.  Through an extensive list of tastemakers, artists, and celebrities, Back of House wants to provide the kind of fresh, relevant material that makes guests feel on the cutting-edge of what’s current in the always-shifting cultural scene. Reminds me a bit of the 2010 launch of the LVMH blog, Nowness.com, which, after three years, appears to attract (according to Quantcast.com), approximately 184K UMVS (unique monthly views). Given the difficulty in growing a brand website or blog as a destination without daily content updates, a brilliant SEO strategy, and advertising support, it will be interesting to see how their content strategy develops and what they’ve set as KPIs to measure success.  That said, the brand is always one to watch with their tapped in style.

Journalist and Marketing Executive, Revis has worked as an Adventure Guide in the jungles of Costa Rica, rafted Switzerland’s Class IV rapids, studied wildlife in Australia and New Zealand, worked as a Hollywood advertising film executive, and helped brands like Samsung and Oracle tap into the best of their digital marketing lives. In addition to living on the 13th floor of an apartment complex in Buenos Aires and steps from the Viper Room off the Sunset Strip, she's been a columinst covering the spa industry for DaySpa Magazine and a Contributing Editor/Columnist at Los Angeles Confidential Magazine covering entertainment, luxury travel, and charitable causes. She's also contributed to The HuffingtonPost, Mashable, Teen Vogue, Town + Country, Islands Magazine, Kiteboarding Magazine, Moving Pictures Magazine, and Surface Magazine. PS. She doesn't like water chestnuts.