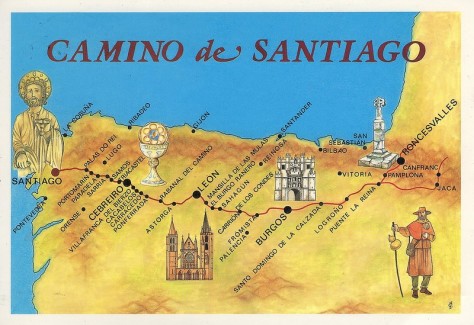 If you’ve never heard of it before, the Camino de Santiago is a medieval pilgrimage in Spain inspiring millions of pilgrims throughout the centuries. It has also been a unique source of healing for all of those who have walked it. Many pilgrims still use this pilgrimage as a way to balance their life, find some answers, or simply take some time away from the over busy life style we experience. So, a group called Follow The Camino decided to bring pilgrims a new way to experience the Camino, easing this unique Camino and transforming it into a scented spiritual journey.

They’re inviting guests to follow the last part of the French Way, from Sarria to Santiago, the very famous last 100km of the pilgrimage with a unique Aromatic Camino Kit and the comfort and advice of their aromatherapy expert, Pam Conrad. Popular scented herbal examples in these regions include lavender, rosemary, thyme, bergamot, and eucalyptus, to name just a few. Connecting your walk with the aromatic plants and their gifts is a perfect way to fully experience your Camino.

As you walk the Camino Zen Aromatic, you will learn the benefits of aromatherapy to ease your Camino, but also to heal your mind in a natural way. The Camino Zen Aromatic tours will include Aromatic Camino Kits to support your journey as well as two experiential aromatherapy sessions with Pam, customized for physical, emotional, and spiritual support as well as aromatic education. Daily aromatips will be provided too.

These sunglasses can pull a small aircraft!

Yes, it’s true. We recently came across this interesting line a few weeks ago and had to check it out. After all, durability is of the utmost importance when it comes to travel gear. OVVO Optics designs exceptionally durable frames for any type of excursion a travel warrior may stumble upon.

Quality like this is particularly hard to find in a day and age when people are outsourcing to China and we like the fact that everything is manufactured in Europe through family owned factories.

Drawing on the powerful blend of cultures including Spanish, Portuguese, French, Dutch, Chinese, African, Creole and Indian, we just discovered that Trinidad and Tobago’s “foodie” scene is one of the best Caribbean destinations for curious gourmands looking to take their taste buds on a culinary world tour. From street food to fine dining, the destination offers visitors the chance to savor a unique and adventurous culinary style that offers tasty options, regardless of dietary needs—vegetarians to meat lovers and those in between.

Secret on the Side of the Road

For a unique culinary experience, visitors can to take the unbeaten path that leads to the side of the road.  Street vendors serve some of the most traditional, memorable and flavorful foods on the islands, including doubles, roti, various soups, pholourie and chow. Doubles, one of the most popular street side delights, are made up of savory curried chick peas between two barra, or flat fried bread.  Perfect for breakfast, a snack or a late night treat.  When in search of the next meal, street foodies need look no further than a roti vendor.  Similar to an Indian flat bread, roti is filled with finely ground split peas, then wrapped with curried meat, shrimp and/or vegetables.  Trinis love their soups and many can be found enjoying a bowl of cow heel soup, one of Tobago’s most popular soups in addition to pig tail, fish broth and Creole corn soup, served piping hot with corn, coconut milk and dumplings.  Another favorite is pholourie, fried balls of dough that are incredibly versatile as they can be enjoyed sweet, with tamarind sauce or mango chutney, or savory with chandon benni (cilantro).  When in search of a sweet and savory combination, many Trinis reach for chow, sliced mango and pineapple marinated with chandon benni, garlic, salt and pepper.  The most popular spots to taste street treats include St. James, Port of Spain’s nightlife capital, and Queen’s Park Savannah.

For the ultimate authentic taste of the islands, Trinidad’s famed Maracas Beach, often referred to as the bake and shark capital of the world, is not to be missed.  Trinidad’s signature dish serves up shark fillets seasoned with a tangy lime marinade, deep fried to perfection, then stuffed in between fried bread and spiced with choice of a seemingly endless number of toppings, including garlic, pepper, cilantro and pineapple.  Another favorite, alloo pie, a potato filling mixed with a variety of meats or vegetables in dough that is then deep fried, is one of the many quick delights you can buy from most of the street food vendors throughout the islands.  On sister island Tobago, Store Bay beach goers enjoy the island’s signature dish, curried crab and dumplings.  Visitors should note that there is no need for knife and fork, just fingers, some patience and napkins to eat the sometimes messy dish.

With Caribbean food rapidly growing in global popularity, one of the islands’ most exciting movements in local cuisine is the emergence of haute cuisine where traditional Trini dishes are prepared in a trendy gourmet style.  In Trinidad’s burgeoning gourmet restaurant scene, patrons will find a variety of fine dining restaurants from international to local cuisine.  Chaude Creole, in particular, has given street food a haute makeover by serving French, Chinese and Thai influenced dishes in a gourmet tasting style.  Many of these dining destinations can be found on Ariapita Avenue, also known as “The Avenue”,  Woodbrook, St. Ann’s, St. Clair and around the Queen’s Park Savannah.  Other fine dining favorites include: Flair, Veni Mange, and Aspara in Trinidad and Seahorse Inn and Café Coco in Tobago.

For more information on Trinidad & Tobago:

COMO Hotels and Resorts will open its first US property, Metropolitan by COMO, Miami Beach in December.  If you’re not familiar with their properties in Turks & Caicos, Bali, London, and beyond… take note. This 74-room hotel occupies an original 1930s building in the heart of the city’s Art Deco District and will have direct access to the beach and a private swimming pool, two restaurants, and a COMO Shambhala Urban Escape spa.  A daily schedule of complimentary yoga and Pilates will also be available to guests, reflecting the company’s commitment to wellness. Pst… they’re famous for their spa, y’all.

Located on Collins Avenue and 24th Street, the property has views that stretch across the Atlantic to the east or the Intracoastal Waterway to the west, flooding rooms with light. Interiors are by the Italian designer Paola Navone, who preserved the hotel’s Art Deco heritage and contrasted it with an urbane, contemporary spirit in shades of peppermint green and dusky grey, with surfaces of cool white marble and shining chrome.

The hotel will feature two restaurants.  The Traymore, the headline restaurant, will showcase Floridian seafood, with an emphasis on fine dining and traditional service; the poolside restaurant will be more relaxed, with wood-baked pizzas and easygoing pick-up food to enjoy during the day.  The Met Bar will offer premium spirits and Champagnes, while the rooftop COMO Shambhala juice bar will be a space to revitalize with a bespoke juice blend after a workout, beachfront run, or massage. Love ‘bespoke’ juice.

Metropolitan Miami Beach is the first stateside venture for COMO Hotels and Resorts, which owns, among other properties, two other Metropolitan hotels in London and Bangkok.  The Singapore-based company also owns the private island resort of Parrot Cay by COMO in the Turks & Caicos.  Parrot Cay is a direct 90-minute flight from Miami, allowing for a perfect pairing with this opening, we think.

Marketing Executive, Journalist, and Hotel Hound, Layla Revis has worked as an Adventure Guide in the jungles of Costa Rica, rafted Switzerland’s Class IV rapids, studied wildlife in Australia and New Zealand, worked as a Hollywood advertising film executive, and helped brands like Samsung and Oracle tap into the best of their digital marketing lives. In addition to living on the 13th floor of an apartment complex in Buenos Aires and steps from the Viper Room off the Sunset Strip, she's been a columnist covering the spa industry for DaySpa Magazine and a Contributing Editor/Columnist at Los Angeles Confidential Magazine covering entertainment, luxury travel, and charitable causes. She's also contributed to The Huffington Post, Mashable, Teen Vogue, Town + Country, Islands Magazine, Kiteboarding Magazine, Moving Pictures Magazine, and Surface Magazine. PS. She doesn't like water chestnuts.